What Mormons Believe about Humanity

What kind of beings are we, and how do we relate to God and everything God made? Let’s take a look at how Mormonism answers those questions.

What kind of beings are we, and how do we relate to God and everything God made? Let’s take a look at how Mormonism answers those questions.

Latter-day Saints believe that all human beings are eternal spirits: we existed before this earthly life as God’s spirit children. In some sense, they believe humans are uncreated and co-eternal with God. In another sense, as spirits we are seen as the literal sons and daughters of heavenly parents. By contrast, the Bible teaches that human life and existence begins in this world.

Genesis 2:7 Then the Lord God formed the man from the dust of the ground. He breathed the breath of life into the man’s nostrils, and the man became a living person.

Mormons believe human beings are the literal offspring of God.

John 1:12-13 But to all who believed him and accepted him, he gave the right to become children of God. They are reborn—not with a physical birth resulting from human passion or plan, but a birth that comes from God.

Mormons believe human beings are the same kind of being as God.

If people are literal children of God, it follows that God is the same kind of being that we are, and that we are of the same species as God. But the Bible teaches that humans are finite creatures, not potential deities. It’s true that human beings are amazing creatures, but we are “mere mortals” and we are lower than God.

Psalm 8:4-5 What are mere mortals that you should think about them, human beings that you should care for them? Yet you made them only a little lower than God and crowned them with glory and honor.

Mormons believe human beings are capable of becoming gods themselves.

According to Mormon doctrine, we can become powerful beings that create and rule worlds populated by our spirit offspring – just as God did. This is called “exaltation” and is related to their concept of eternal progression. But the Bible portrays human beings as fallen and spiritually lost. Far from God-like, we are in desperate need of God’s mercy to save us from our sins.

Romans 3:23 For everyone has sinned; we all fall short of God’s glorious standard.

While Latter-day Saints use many words and phrases familiar to traditional Christianity, the underlying world view of Mormonism is very different from historic, biblical Christian faith. This is seen most dramatically when comparing what the two groups believe about the nature of God and the nature of human beings.

This is part of the What Mormons Believe series. 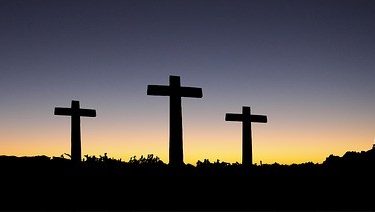 Understanding the Cross After Leaving Mormonism

Study the Truth After Mormonism